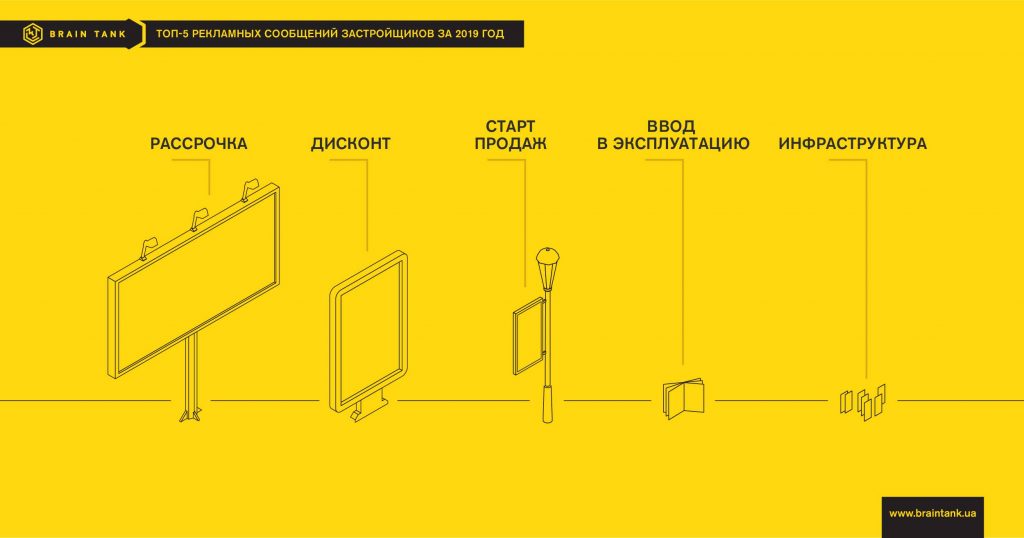 To answer the question "So what about do the competitors say?" the agency worked on 354 advertising real estate campaigns in the capital, launched in the media from January to July 2019. All the creatives by which the developers have attracted the potential buyers’ attention were considered, as they say, "under the microscope." Each promotional message was classified according to its key efforts.

1. Payment by installments.
It is beneficial for buyers who want to get an apartment now and settle financial issues in time.

2. Unreasonable discounts / dumping price reductions.
An effective technique in the fight for a customer who is not used to spending extra money.

3. Start of sale of new launchers.
Attracting potential buyers to a new, focus on being among the first.

4. Completion of construction/commissioning of the facility.
The opportunity for the client to see the completed apartment not ever, but here and now; confirmation of the reliability of the complexes.

5. "Closed yard" / kindergarten / playground.
Very limited and copied "from the market," in a sense, set of infrastructure elements.

What shows us such a “modest” semantic core?

At the moment, the capital's residential real estate market is still very young. This is evidenced by the fact that market laws are not yet known to all players who, for reinsurance, either openly copy consumer messages to each other (in particular, about infrastructure), or use #guaranteed_concrete arguments (talking about money), and even state the facts completely (talking about starting or ending construction).

And, to be quite sober in anamnesis, communication is the result of developers’ thinking who are still searching for their product and their philosophy, which they could boldly recite to the consumer.