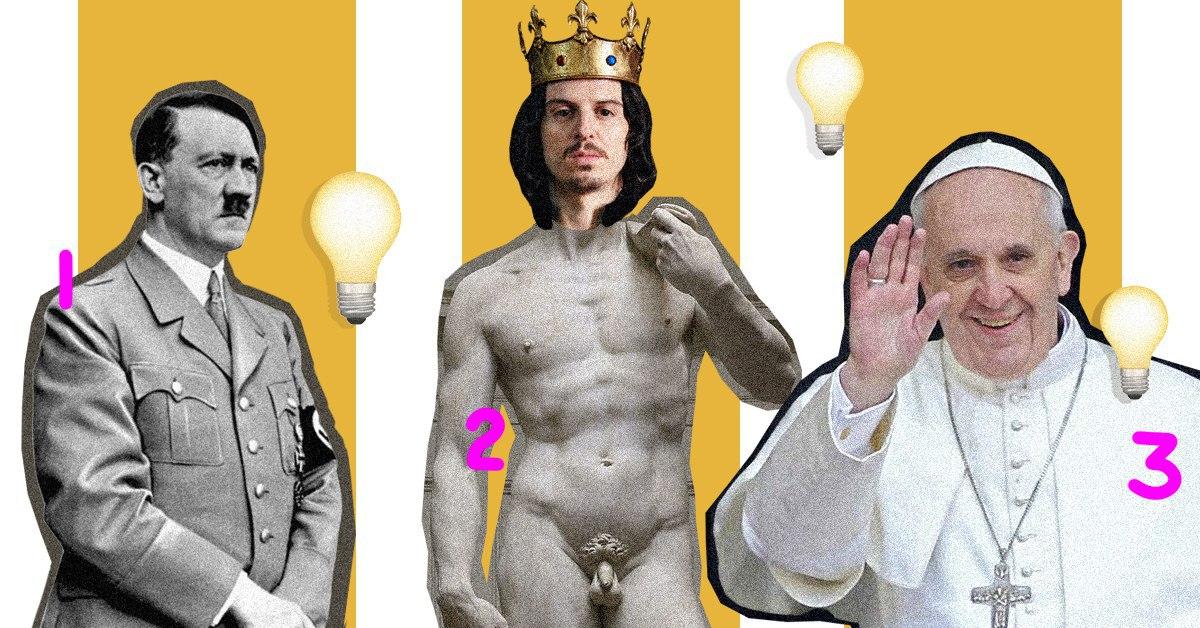 Brainstorms and the idea creation is a necessary and noble job. But how do you know which idea is really the best? Andriy Franchuk, Creative Director of the Brain Tank group, offers to seek advice from an expert group — "Inner Hitler," "Naked King," and "Pope."

There are many good articles on generating ideas. Another question — what should the Art Director do with the whole pile of creativity that they received after the brainstorm? Of course, the idea should align with the overall brand strategy, marketing, and different numbers. But if we are talking about pure creativity, we should rely on something more weighty than taste a la "cool" / "not cool." You need to understand why this one idea is the best of hundreds of others. Is it really working?

In the format of the author's methodology, we propose a development — a unique expert nano-ultra-filter consisting of three extraordinary components. Okay, okay, just thoughts on the topic, but very interesting. Let's look closer to 3 filters: "Inner Hitler," "Naked King," and "Pope."

Inner Hitler's job is to determine if an idea has an enemy. Most likely, if the idea is everyone's friend, it will fail. You could agree, we react to friends much more calmly than to enemies. And it's even better to be friends against someone. A successful idea must fight the enemy.

A textbook example is a confrontation between the villages of Villaribo and Villabaggio, struggling in dishwashing. Or real estate advertising projects inspired by the anecdote: - “Mom, I'm going home. Anything to buy?" - "Buy an apartment and live separately!"

Even a simple shampoo fights dirty hair. And difficult — with a simple one, because it still moisturizes, aromatizes, tones, cools, and washes away dandruff. On the other side of the barricades are anti-body shaming fighters who defend the right of people to have dirty hair.

An idea passes the first filter if we have someone or something to fight against. If we have not found an enemy, then it is better to cremate the creative or, in extreme cases, freeze it to use it later in the absence of better ideas.

A slightly different but similar format can be seen in the eternal struggle between iOS and Android, Pepsi and Coca-Cola, BMW and Mercedes with Audi. This is a topic for another material, but for now, the result is the same — we need a confrontation, drama, a heroic victory over the conventional "Hitler." Let the army of slow rabbits, running on simple batteries, play the role of enemies. Hordes of restless and powerful rabbits will fight them, the charge of which will be enough both for victory and for dancing on the plush body of a defeated enemy.

Any advertising communication is a conversation between a brand and a person. The main idea of ​​correct advertising communication is not what the company will say to the consumer but how the latter will react. This is a significant and delicate point. It is necessary to pay attention not so much to the information that the brand conveys but to the understanding and reaction of a person, his reflection.

If we advertise a concert, it’s not enough to say who is performing and when. It is necessary to understand how the person who sees the poster will feel and then imagine himself at a table in a club or a fan zone at a stadium.

What will I be if I buy this particular laptop? What do I get if I switch from regular cigarettes to IQOS? It is not enough to give out information like: "We sell good apartments in a good house at good prices." You need to give emotion and try to anticipate the reaction.

Of course, correct reflection is about strengthening the potential client. If he goes to a concert, he will relax, dance, hear his favorite hits associated with pleasant memories. If you buy a new laptop, it will be able to work better and more comfortably.

When he puffs on an electronic cigarette, he will feel all the benefits of technological progress, which have replaced smoky clothes, smelly fingers, and a morning cough. Advertising of an apartment should give a feeling of coziness, stability, comfort, security.

On the other hand, we all understand why this section and this filter are called "naked king." The product is the seller's business, and we are talking about why some advertising projects are good while others are not.

The main essence of the “consumer pickup” focuses on the viewer's feelings and reflection, his emotional enhancement. If the buyer cannot boast of his purchase and recommend it to others, advertising does not work.

You can boast, even quietly, with anything: health, comfort, innovation, beauty, reliability. Even the fact that I buy this product because I go against the system and I do not care about public opinion. However, we all understand that social approval and the environment's reaction play a huge role in everyone's life.

To pass an idea through the 3rd filter, you need to imagine yourself in the role of a conditional "pope." It is important to answer the question of whether the whole world can say: "Yes, this is a normal idea." Of course, based on the project, "the whole world" can be limited only to surfers or residents of Brovary. But more importantly, social responsiveness is a critically important aspect of evaluating a creative idea. A good idea works for everyone or just about everyone.

There is social approval for the fight for ecology and recycling. And here is a great solution — child car seats made of recycled plastic save not only babies but also nature. On parental forums, they can write that this plastic is more fragile. But those who see the opponents of "Hitler" from the first paragraph will stand up for your defense.

Or, for example, there is a stereotype that electric cars are good. Society supports the reduction of emissions and noise, as well as innovation. How batteries are made and how to dispose of them later is of little interest to anyone. It remains out of the question that almost all electricity in Ukraine is the result of burning fuel, oil and coal, and nuclear power plants.

The main thing is that society should support the idea, receive a social response, and the assessment “yes, this is good, this is correct.” That is, each person should feel the unity and support of the majority. So until the middle of the 20th century, syphilis was treated with mercury, and everyone was happy, albeit not for long.

Of course, in some cases, it reaches the point of absurdity. Soon they will be producing halal mineral water without GMOs, cholesterol, lactose, and gluten. But in the hands of an adequate creative, this filter is excellent.

Let's take a real case example of the spectacular appearance of the Dream Town shopping center and the scandalous protest, politicized birth of the Oasis shopping center located next door. Why was the latter so problematic? Because everything was done on the quiet, without adequate information support. At first, they said that some repair work was underway, then they surrounded the Heroes of Dnepr metro station with a fence and silently began to build.

If we use the first filter, we could explain that a small "Oasis" is an ideal solution, a golden mean between small stalls and a huge Dream Town, in which you can get lost. We will be friends against them.

If you pass the second filter, you get pleasant feelings caused by good service, adequate prices, the right goods right next to your metro station. The Pope would say that Oasis is the most important infrastructure facility in the entire area. It could also play because the more stores and shopping centers, the higher the competition, which means you will get the maximum offers at the lowest prices.

These filters also work on a smaller scale. For example, a new mayonnaise needs to be launched on the market. Well, everyone knows that mayonnaise is bad. Ok, then the manufacturer calls their product "Zenoyam sauce," and the rest of the plain mayonnaise becomes "Hitler."

The Naked King gives you a sense of uniqueness, you feel like a nutritionist, and a chef all rolled into one. The global mission of the "Pope" is proper nutrition and a healthy lifestyle around the world.

I hope these three characters really help you pick one idea out of dozens. However, the expert group can be expanded, suggest heroes.